Sometimes when doing provenance research you find yourself at a dead end.  All the typical resources have been consulted and all usual avenues of research have been exhausted.  So what do you do in that case?  Let me give you an example of one instance I’ve come across in my research that left me stumped and forced me to think outside the box and make creative use of available sources.

I had two paintings by minor nineteenth-century French artists whose provenances I was supposed to establish.   The only provenance listed was that both paintings had been purchased in the mid-1980s at the Paul Altman Gallery (name changed) in Paris.  No official sales documents or other details of the sale were provided, and so my next step was to look for more information about the Altman Gallery and/or Paul Altman himself—a task that proved more challenging than anticipated.

Normally, when searching for information about a particular gallery, certain resources are consulted: the Getty collector files, the Getty provenance databases, auction records, the Benezit Dictionary of Artists, Grove Art Online, and so on.  Searches of none of these yielded any results for Paul Altman or his gallery.  I was able to consult several specialists of nineteenth-century French painting who may have heard of this dealer or gallery—but none was familiar with Altman.  I then looked at auction catalogues containing other works by these two particular artists to see if any of them contained Altman in their provenances, but none did.

I then turned to some non-art-specific sources such as Who’s Who reference publications and Parisian telephone books from the mid-1980s, but these searches, too, were unsuccessful.

Finally, I looked at several editions of the International Directory of Arts, which contains listings of arts-related professionals.  I was not hopeful, and as I had suspected, there were no galleries or established dealers by the name of Altman.  However, I did find one potential lead: a “M. [Monsieur] Altman” was listed as an art/antique vendor at the 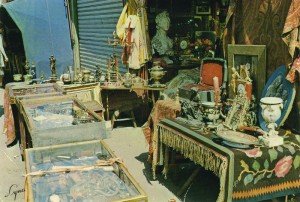 Marché Vernaison-Saint-Ouen; a row and stall number were given.  This address suggested, of course, an outdoor flea market rather than a gallery, and indeed, it would not be unusual for minor artists like those in question to be sold in this setting.  Unfortunately, I was unable to gather additional information about “M. Altman,” as the only sources dealing specifically with the Marché Vernaison-Saint-Ouen are two websites about the market and its history—neither, however, provides the type of detail that would offer any additional clues about “M. Altman.”

Ultimately, in a case like this, the minor status of the artists combined with a lack of information about an item in the provenance make further investigation of the provenance difficult; it is an unfortunate fact that not all objects have a discoverable provenance.  Nonetheless, it was satisfying to know that I had done my best to obtain information about Paul Altman, and that I had likely discovered who he was and where he operated, if only on a very basic level.