Let’s start at the beginning

How and why did I decide to study art history?  I didn’t have the opportunity to study art history in high school, although my mom was always getting me art books from the library when I was young; my absolute favorite was Marc Brown and Laurene Krasny Brown’s Visiting the Art Museum, with its real photos of famous sculptures and paintings inserted into the otherwise illustrated book. 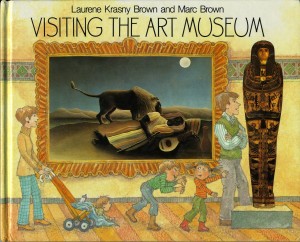 When I arrived at Barnard College in New York in the fall of 1999, I knew that Introduction to Art History would be on my list of courses to take my first semester.  I wasn’t as excited about the fall portion of the survey, which covered ancient art until the Renaissance, as, at the time, my main art historical interests were Surrealism and the Hudson River School.  However, I fell in love with Roman art and found medieval architecture a lot more interesting than I had anticipated.  I began to wonder whether it was art history—not urban studies or theatre (at the time I was considering becoming a costume designer)—that should be my major.

The spring semester opened with the Renaissance.   While I certainly found the Italian Renaissance interesting, it was the Northern Renaissance—this portion of the course was taught by Professor Keith Moxey, whom I would come to see as my mentor—that really captivated me.  It was in particular Dürer’s print Melancholia I that I found fascinating, along with the famous essay on the print by Edwin Panofsky.  It was upon reading and discussing that article that I decided that I had to major in art history. And I went even further than that—even as a freshman in college, I knew I wanted to go on to study art history in graduate school.

By the time I graduated from Barnard, my interests had shifted to nineteenth-century French and British painting, as well as nineteenth-century illustration.  I wrote my senior thesis on the relationship between illustrations on Alice’s Adventures in Wonderland (from Lewis Carroll’s original drawings accompanying his manuscript to a Alice video game from 2000) and contemporary conceptions of childhood.

In the fall of 2004, after one year of working as a Curatorial Assistant, I entered Princeton’s graduate art history department.  Initially thinking I wanted to teach, I quickly came to the realization that, for a variety of reasons, academia was not right for me.  So what was? Museums? Auction houses? I wasn’t sure…