The following case study describes the process I undertook to identify with certainty the full name—whose surname and only first initial were provided—of a collector listed in a provenance.

Two of Giambattista Tiepolo’s Punchinello drawings (one currently in the Morgan Library, pictured here, and another whose current location is unknown) 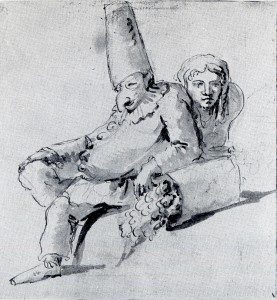 share one collector in their respective provenances: Bossi.  However, while the Morgan Library and George Knox, a Tiepolo scholar, list the former owner of the Morgan drawing as “L. Bossi” of Genoa, a 1948 Schaeffer Galleries exhibition catalogue prints the name under both drawings as “I. Bossi.”

Because names in provenances can be recorded erroneously—and repeatedly so—over time, in my attempt to identify correctly the Bossi in question, it was worth considering all individuals named Bossi who could have owned the drawings.  The first Bossi who comes to mind in relation to Tiepolo’s drawings is Giovanni Domenico Bossi. Purportedly a student of Domenico Tiepolo, Bossi amassed a collection of over 600 Tiepolo chalk drawings but had no connection to Genoa and seems to have collected only chalk drawings.

Another Bossi connected to Tiepolo is Ludovico Bossi, the nephew of Antonio Bossi—the stuccoist who worked with Giambattsta at the palace of Würzburg.  However, he had neither a Genoese connection nor known collecting activities.

As I continued my research using biographical dictionaries I came across several L. Bossis from Genoa who lived in the late nineteenth and early twentieth centuries; they are not known to have been collectors, however.

The last possible Bossi I encountered was Ildebrando Bossi of Genoa.  Bossi was a dubious art dealer (and one of the American Association of Museums’ red-flag names) who sold objects to Walter Hofer, Goering’s chief art adviser, during World War II.  In 1969 it came to light that in 1947 he had purchased a small portrait of Eleonora Gonzaga, attributed to Raphael, from an aristocratic Genoese family and exported it illegally to the United States.  At the time of his death in 1970, Bossi was under indictment.

While Ildebrando Bossi seemed a likely, if unfortunate, candidate for the Bossi in question, I wanted to confirm my hunch.  Confirmation came from Benno Geiger’s 1945 book, I Disegni del Magnasco.  It includes several Magnasco drawings that were later sold at the same 1948 Schaeffer Galleries exhibition as the two Punchinello drawings belonging to Bossi and also lists “I. Bossi” as their former owner.  In his book, Geiger locates these Magnasco drawings as currently being in the collection of Ildebrando Bossi of Genoa.

Because Bossi was connected to Walter Hofer, one must consider the possibility that the Punchinello drawings in Bossi’s possession had questionable provenances during the war.  Conversely, one must also keep in mind that just because a work of art is connected with an individual involved in dubious art collecting practices during the war, it does not mean that its provenance is in fact questionable.  My research into the provenances of these two drawings, which continues, has not brought anything suspicious to light.

As you can see, the path to confirming the identity of an owner or collector is not always direct.  Sometimes you must go through multiple possibilities before arriving at the correct one, and even then, confirmation can involve several steps.  So you must remember to be persistent, creative, and as always with provenance research, to be aware of individuals whose World War II-era activities require further investigation.