Currently in a British private collection, this drawing is one of Giambattista Tiepolo’s many 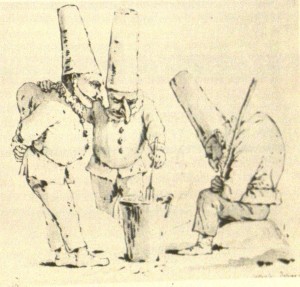 Punchinello drawings illustrating a venerdì gnoccolare scene.    It depicts a Punchinello sitting on a rock, slumped over with his elbows resting on his thighs.  His two Punchinello friends watch over and stir a steaming pot of gnocchi while also keeping an eye on their ill companion.

This drawing is one of several that appear in two early and important articles from the early 1980s concerning the Punchinello drawings.  In both of these studies, this drawing is listed as formerly being in the “Folinoux collection.”  This provenance was likely determined based on the inscription in the lower right hand corner of the sheet, which does indeed appear to read “Collection Folinoux” (unfortunately, this reproduction is poor, and the inscription is hard to decipher).

However, as I began my attempts to verify this provenance detail, I came to a dead end.  There was absolutely no record or mention anywhere of a gallery, dealer, or private collector by the name of “Folinoux.”  I searched the various Getty provenance databases, the Getty Collectors Files, several Who’s Who reference books, Grove Art, and other resources (including Google – don’t underestimate it), and came up empty.  In other words, all of the usual sources one would use to identify collectors or gather additional information seemed to imply that this “Folinoux” had never existed.

A short time later I found out that this drawing had appeared in several auctions.  As any good provenance researcher should do, I consulted hard copies of the actual auction catalogues to verify this.  And I found something interesting: the Sotheby’s London, May 4th, 1938 catalogue listed the drawing’s provenance as “From the Jollimont Collection,” while the Sotheby’s London, June 27th, 1974 catalogue said the drawing was inscribed with “Collection Jolimnet [?].”

A question mark indeed! I began my search again.  As I had found with my Folinoux search, this “Jolimnet” also seemed not to have existed.  And neither did “Jollimont”—but “Jolimont” did.

François Gabriel Théodore Basset de Jolimont (1787-1854) was an artist and antiquarian, as well as a known collector of paintings and works on paper: his name appears in the provenances, or as the buyer/seller, in many auction catalogues listed in the Getty Provenance databases.

And so the mystery of “Folinoux” was solved.  While the drawing’s inscription—now that the name Jolimont is known, the inscription clearly reads as such—strongly suggests that the drawing was, in fact, in Jolimont’s collection, the next step will be to get my hands on some obscure early nineteenth-century French auction catalogues to see if the Tiepolo drawing appears in any of them.  I have not yet, however, had the opportunity to do this.   While the Getty Provenance databases do include some sales containing works from Jolimont’s collection, no drawings by Tiepolo are listed.  This does not mean, on the one hand, that no Tiepolo drawings were auctioned off from the Jolimont collection; on the other hand, it could imply that the drawing left his collection by other means.  It is not known how the next name in the provenance, Julius Lessing, an art historian and director of the Kunstgewerbemuseum in Berlin, acquired the drawing.  But born in 1843, Lessing certainly did not get it directly from Jolimont, who died in 1854 (unless he was a VERY precocious collector).

So what is the lesson learned from this case study? If you’re on the research side, verify all existing provenance information—even if it’s been published.  Keep in mind that names get incorrectly transcribed and recorded erroneously over time.  And if you’re on the collecting end of things? Write clearly—you could save researchers a lot of trouble and confusion in the future.