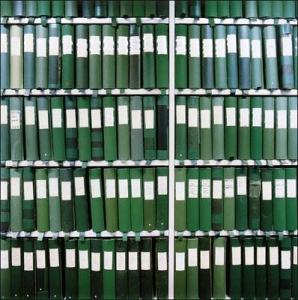 The Witt Library at the Courtauld Institute of Art in London, with its approximately 2 million reproductions (see photo) after works of art that are often accompanied by provenance information, is an invaluable research for provenance researchers.

I went to the Witt Library while conducting provenance research on Giambattista Tiepolo’s Punchinello drawings for my dissertation to see if its reproductions of the drawings contained any provenance details that would help me establish more complete ownership histories. What I ended up finding were several unpublished drawings that I, nor, as I later found out, several Tiepolo scholars, had ever seen before. Their current locations are unknown. I’d like to talk about my attempts to trace the provenance of one of these drawings, as they illustrate some of the typical and more unusual methods that might be used to track down the past whereabouts of a work of art.

The Witt reproduction I came across is a photocopy of a auction catalogue page that revealed that the drawing was No. 58 in a German or Austrian auction catalogue: a price estimate is printed next to the drawing’s dimensions and medium. The Witt mount shows the oval drawing, there titled Fastnachtscherz (“carnival joke”), which depicts four Punchinelli gathered around a fifth who, seated on a bench, is defecating – most likely due to overconsumption of wine and gnocchi.

No provenance is printed as part of the auction catalogue text, but typed onto the Witt mount is, “O. Nierenstein (1928).” Otto Nirenstein, also known as Otto Kallir-Nirenstein, was the founder of the Neue Galerie in Vienna. In 1938 he emigrated to the United States and one year later opened the Galerie Saint Etienne in New York.

I decided to proceed with the more obvious possibility (I needed someplace to start after all) – that Nirenstein consigned the drawing to an auction house in Vienna in 1928. A search for Tiepolo drawings appearing in 1928 Viennese sales, using the Getty Provenance Index and Art Prices Current, did not lead to the drawing, nor did a search for auctions containing works from the Kallir and/or Nirenstein collections. I contacted Jane Kallir, Kallir-Nirenstein’s daughter, currently the co-director of the Galerie Saint Etienne, but she was not familiar with the drawing and did not have any suggestions as to how I might track down the auction catalogue in which it appeared.

I looked at Heinrich Moderns 1902 Giovanni Battista Tiepolo: eine Studie, which includes a section that lists the artist’s paintings and drawings that were located in Viennese private and public collections at the time. Neither Kallir nor Nirenstein (nor any Punchinello drawing) are mentioned. There is, however, no indication as to whether the list is complete or not.

So, at that point it was time to get more creative. I began looking at Viennese auction catalogues from c. 1928 to see if I could identify the auction house that offered the Tiepolo drawing based on a comparison of the font and format of the Witt photocopy and of the various catalogues I was able to consult at New York City libraries. I narrowed the possible auction houses with catalogues that resembled the sheet in the Witt to Galerie Leo Schidlof, C.J. Wawra, (Ignaz) Schwarz, Lepke, and S./A. Kende, with S.A. Kende appearing most similar. Still, none of the catalogues I checked contain the Punchinello drawing.

This unpublished drawing’s provenance still eludes me. In March 2013, the University Library of Heidelberg launched Part II of its indexing and digitization project of German, Austrian, and Swiss auction catalogues, which will cover the years 1902-1929 (Part I, which covers 1930-1945, was completed in in February 2013 and has been integrated into the Getty Provenance Index). When Part II is up and running, I guarantee I’ll be the first to log on.