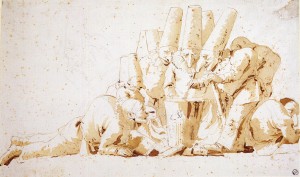 The majority of Giambattista Tiepolo’s Punchinello drawings, on which I wrote my dissertation, depict Punchinelli celebrating venerdì gnoccolare, the carnival bacchanalia that takes place in Verona on the Friday before Ash Wednesday (see image).  The festivities and rituals of venerdì gnoccolare, called the Funzione dei Gnocchi, revolve around a procession, or the bogon, which makes its way through the city to the Piazza San Zeno, where vast quantities of gnocchi, polenta, and wine are consumed.

The bogon departs from the quarter of San Zeno, situated in the southwest section of Verona, in the early afternoon and marches toward the Piazza di Signori (see image).  A song from 1751 describes the procession:

“You would see many people, and in the Bogon

Lots of bread, lots of wine, and lots of cheese;

[Everybody] is enjoying a concert for free, 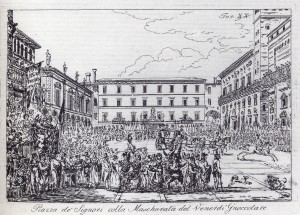 And the license to make a mess;

A nice parade with beautiful costumes

Trying to please the capo

With a lace suit and a periwig,

And these are all the putti of San Zeno.

You would hear fifty or more putti

Up to San Zeno, and when he arrives there,

You would see something even better;

You would see a grand palco where lies

A huge pot of gnocchi you could fall in love with,

And butter, and cheese,

Things that make you crave;

And on the other side, a group of twelve poor people

Dressed in white according to the tradition

Who have dinner with a great abundance

Of bread and wine,

And a big pot of gnocchi.”

Much of the procession is comprised of various groups, or compagnie, of sanzenati—youths from the quarter of San Zeno.   The putti, dressed in white clothing decorated with red bows, ride on horseback.  Other sanzenati are disguised as Punchinelli, hopping about and

poking their long noses, waving forks and flying banderoles.  These sanzenati-Punchinelli are flanked by their Punchinello leader, Papà del Gnocco, also known as the capo dei maccheroni, who proceeds on a donkey (see image).   Accompanying this Mascherata de’ Maccheroni is the triumphal carriage dell’Abbondanza, adorned with leaves and filled with bread that is thrown into the crowds throughout the celebration: “from the triumphal carriage bread is thrown/to console the stomachs of all the people.”  Men on horseback, millers, and farmers from the San Zeno quarter follow.  The leader of the putti, the capo dei putti, adorns the carriage of the podestà with a laurel crown as a sign of submission, while Papà del Gnocco rides toward the palace on his donkey to recite macaronic compliments to the governor and invite him to the festivities:

“Sior Selenza, please forgive me that I came here;

Alas, I am out of breath, I had enough!

I struggled so much to come over here,

That I cannot tell – you talk!

Oh, my brother is a donkey and should shut up.

Because it is my job to pray, Sior Selenza,

To come with us to San Zeno,

And because he is a good man, he will consent.

On this day of Cuccagna for Verona.”

After listening to these words of praise, the governor and the nobility stand on the balcony of the palace, overlooking the crowds celebrating in the piazza, and recite poems in honor of venerdì gnoccolare.  On the other side of the piazza, near the palace of the podestà, one hundred men load baskets with cheese, bread, and wine.  Together with the masquerade of sanzenati they form a procession that marches back to the Piazza San Zeno.  The governor and members of the city government also proceed to Piazza San Zeno in a carriage surrounded by the sanzenati and children carrying flour.  The procession ends with the equestrian militia and Veronese citizens marching on foot.   A wooden triumphal arch, covered in silks and decorated with the arms of the governor and of Verona, is installed at the entry into Piazza San Zeno, and a wooden platform, or palco (see image), 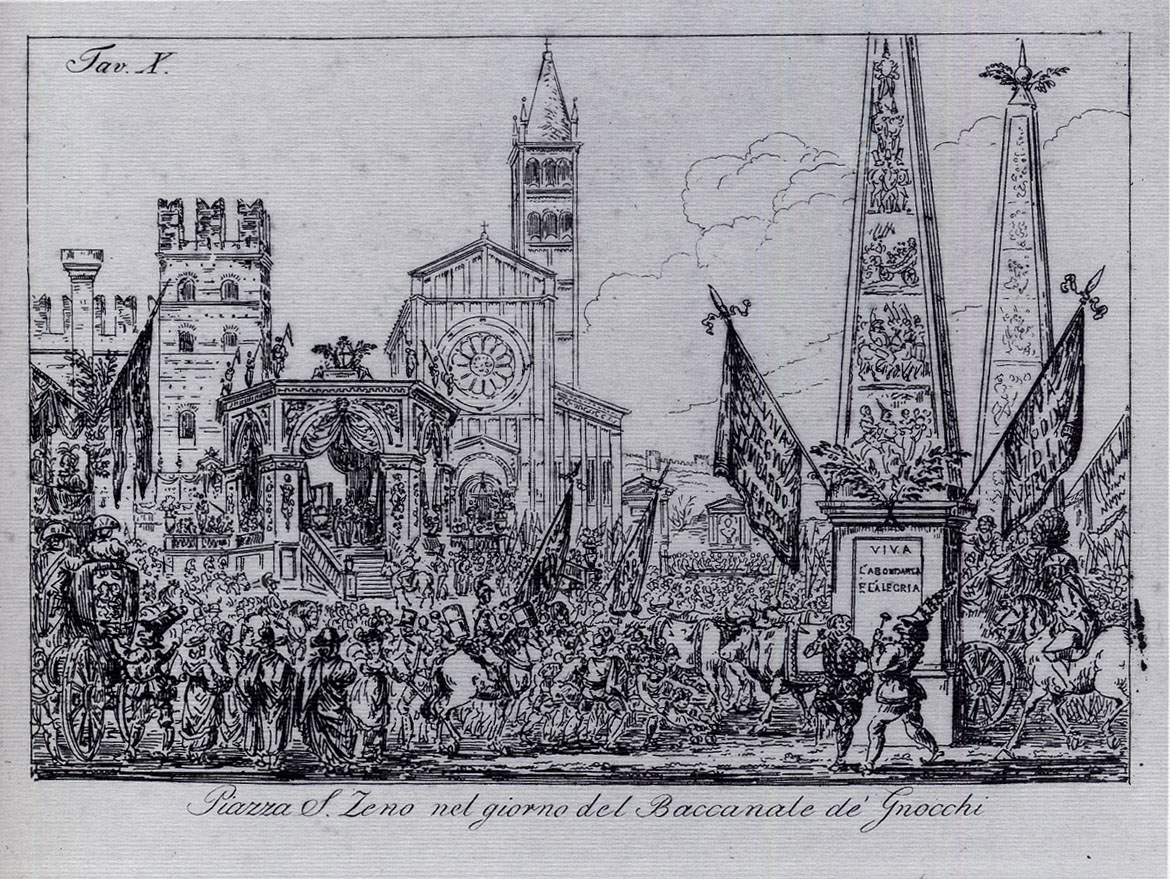 is constructed and ornamented with tapestries, leaves, and flowers.  The preparation of gnocchi and polenta in large pots begins after all the participants and revelers have arrived at Piazza San Zeno.  The capo dei putti and the capo dei maccheroni present a large plate of gnocchi to the governor, who sits in a room in the adjoining abbey—this ritual is depicted in one of Giambattista’s Punchinello drawings (see image), in which we see a Punchinello present a large plate of gnocchi to a Punchinello podestà or governor.  Meanwhile, in the 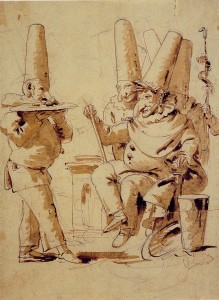 abbey courtyard, gnocchi are distributed to poor families.  They feast at a large stone table near a sculpted bust of Tommaso da Vico, supposed “founder” of venerdì gnoccolare, located in a niche on the side wall of the church of San Zeno.  Finally, the government representatives return to the palace, where they partake of their own feast.

There are multiple theories concerning the origins of venerdì gnoccolare, but the prevailing opinion is that the holiday commemorates the revolt by the population of the poor sections of Verona, triggered by a combination of the severe famine that resulted from the flooding of the Adige in 1520 and 1531 and the years of unrest caused by the war between Charles V and François I.  Faced with these circumstances, city authorities imposed a controlled price of bread on the pistori, or bakers.  However, the bakers, not wanting to lose money, withheld bread from the people, depriving the hungry population of Verona.  On June 18, 1531 the people revolted, assaulting the bakers and merchants in order to stockpile bread.  Tommaso da Vico, a physician, writer, and member of a prominent Veronese family, was tasked with controlling the disgruntled masses and organizing the distribution of bread, wine, butter, and cheese to the people.  Since it was not possible to erect a kitchen sufficient to feed all of those in need, Vico set up braziers in the streets in which gnocchi and polenta were prepared.  According to legend, Vico specified in his will that an annual donation of food be left to the poor of the San Zeno quarter.  Upon his death in 1531, a stone bust was placed in a niche next to the church of San Zeno, supposedly erected by the sanzenati (see image). 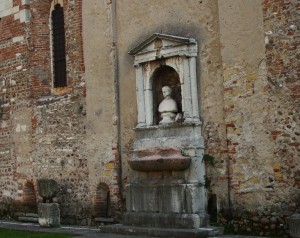 Later scholars, however, disproved the theory that Vico was the initiator of the festival using evidence culled from his will.  Other origin theories have been proposed, including one that suggests that venerdì gnoccolare has its roots not in the sixteenth century but in pagan times.  Umberto Grancelli maintains that prefiguring the chariot of abundance and the masked and costumed revelers were popular bacchanals which, taking their cue from sacred rites, celebrated the renewal of nature and the end of winter with the distribution of abundant food and drink.   For Grancelli, venerdì gnoccolare is analogous and is linked to ancient rites and in particular to the cycle of Demeter, the Greek goddess of the harvest and fertility (for the Romans, Ceres, goddess of agriculture).  Some maintain that venerdì gnoccolare stems from Dionysian festivals that were celebrated in March and December.  In particular, one thinks of Papà del Gnocco, crowned with ivy and riding, drunk, on a donkey in the procession and the similarities to Silenus, son of Mercury and faithful companion to Bacchus, whose attributes were the donkey, the laurel wreath, and the glass.

According to Michel Plaisance and Françoise Decroisette, the alimentary character present in the significant moments of the festival—the feast, the distribution of victuals—is one of the most complex and ambiguous elements of venerdì gnoccolare, fitting in with the gastronomic carnivalesque excesses that are related to the pagan rituals of fertility, the preparations for the renewal of springtime, the Christian preparations for Lent, and popular customs of bread offerings at the beginning of February.  Decroisette and Plaisance suggest that it is the district of San Zeno that is the organizing principle of the celebration and which gives it its profound meaning.  Saint Zeno is the patron saint of Verona, and it is possible that venerdì gnoccolare has its roots in one of the numerous processional holidays in the Veronese church calendar dedicated to the saint.  Over time these holidays evolve according to the political and economic conditions of the city and become fused with carnivalesque celebrations. Furthermore, one of the key elements of venerdì gnoccolare—the distribution of food—recalls Saint Zeno’s charitable activities.  That the district of San Zeno was for a long time the poorest district in the city establishes a natural connection with a gastronomic carnival celebration.

Decroisette and Plaisance also contend that venerdì gnoccolare may have its origins in other manifestations of exchange that occurred among different sectors of Veronese society.  The holiday could be the result of the evolution of votive processions or ceremonies of the translation of relics, which are known to have significance in the formation of urban processional celebrations and festivals, or of other celebrations of Saint Zeno that evolved, little by little, into rituals of the urban community and the government.  Venerdì gnoccolare is marked by a desire to affirm the antiquity of its rituals and of the city, as well as to trace the history of the city in the collective memory, thus guaranteeing its permanence; this is the motivation of all urban carnivals, and it illustrates the complexity of the establishment and evolution of carnivals in an urban context.